Project dependency options help you identify when a projects funding is dependent on another project. A dependencies column is automatically added to portfolios and directly next to the Projects column within the Projects Page. Dependencies can be added by Portfolio Owners and viewed by Participants from each projects details view.

The dependencies section is at the bottom of the project details view, above the Attachments section.

Open the section to add a single or multiple projects and create project dependencies. By adding project in a dependency, a relationship is created where the project in view shouldn’t get funded unless the project added have been funded.

Projects added to a dependency display with their name, start date and status. If any of the projects have not yet been funded, a message displays to indicate that the dependency has manually been broken. The project that breaks the dependency rule will be highlighted in red. Click the red project name to view that project’s details and correct the error, if desired. Dependencies can be manually broken, however the Decision Lens algorithms will always factor them in and will not break them.

In the above example, Project C is In Progress and has been funded. It depends on Project A and Project B. Project A has not yet been funded, so is highlighted in red.

The total number of dependencies displays at the top of the section to inform how many dependencies a project has.

Hover a projects name in a dependency for the option to remove it from the dependency. 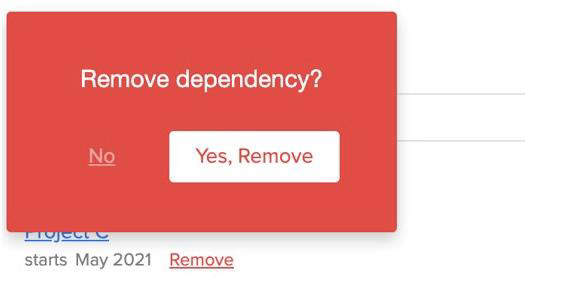